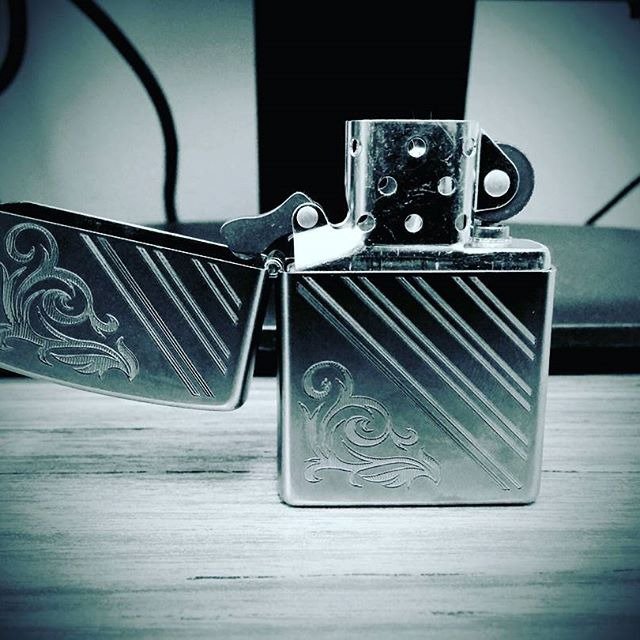 There is an element of precision associated with the process. And it is careful too. First remove the apparatus from the steel casing. Then unscrew the bottom and lift the cotton pad. Slowly pour drop after drop as the soft cotton absorbs it and saturates itself. Replace the cotton pad, screw the bottom and refit the apparatus into the steel casing. Shake it once. Then twice. And then a third time. Flip open the lid and then turn the flint wheel. Let it strike the flint. Sparks come forth. The wheel takes time and then the wick finally catches the spark and the lighter, lights up. Windproof. Nestled safely within the chimney, the harsh winds do nothing to hinder the path of the flame.

He is there. At the corner of ‘Somewhere’ and ‘Anywhere’ lies the log cabin. 'In the Middle of Nowhere'- is his unofficial description. Officially he is in the North Country near the pole. The land of the Northern Lights. The log cabin is surrounded by coniferous pines. At the main door is a large pine tree. There is another tree on the left with thick branches, which is home to a patient owl and a frisky squirrel. They live in harmony. At times when the world lights up in bonfires of unincorporated hope, places that are bereft of the madness of mankind offer meaning to his tomorrows. The escape to the North Country is not a want. It is a need. The log cabin is minimal in its outlook. Just the way he likes it. It reminds him of the Yurta where Tsarkhin Khan, the archer, stayed in, when he went in search of No-One-Knows-What to No-One-Knows-Where.

There is a mattress filled with hay, a fireplace, a small kitchen and a wash. There are rugs and pillows in front of the fireplace. He has just returned from his unsuccessful expedition – ice fishing. At the frozen lake behind the cabin, he had stood for an hour with a fishing tackle but to no avail. He did manage to hook a fish but it got away. Dinner this day, like the previous one, is the same – Kjötsúpa. A traditional meat soup made in the North Country, it appeals to his ways of minimalism. No loose ends. Everything fits perfectly. Zero wastage. The short stay in the North Country is peppered with amusing anecdotes. Running out of the log cabin naked, to feel the cold winds, melting the snow to make ‘funny tasting water’, making patterns in the snow with an odd piece of metal found in the log cabin. Writing names in the snow and wiping them off with a flourish of the hand. These are all secrets that only the wind knows and of course the log fire in the cabin. The owl and the squirrel are at peace. The owl hoots in the night sky keeping watch over the cabin and during the day the squirrel runs along the fringes of the cabin.

The flame of the windproof lighter makes a whoosh-whoosh sound, as he lights the fire. The pot with the Kjötsúpa is set on top of the fire. A few minutes of stirring and whirring later, it starts making the same whoosh-whoosh sound as the lighter. Dinner is again a simple affair. No wastage. Everything fits. Like a giant jigsaw puzzle. There are no elements of over eating either. Everything is just enough.

A few hours later as the snow begins to fall lightly he takes a walk out, into the night sky. The Aurora lights up. The North Lights, which illuminate the house of the Tsar of the North Winds, come alive. A bottle of Slivovitz* in hand, and a cigarette in the other he goes and sits at the edge of boundary walls of the cabin land. It overlooks a vast white desert of snow. Every swig of the Slivovitz reminds him of a memory. Some young, others old, most of them, ancient. The snow itself is all knowing and self-cleansing. It washes him clean, off himself. He raises the bottle offering a toast to the Tsar of the North Winds, and then he drinks freely off it. Keeping the bottle aside he takes out the lighter. The same ritual with the flint wheel. He lights the cigarette. It brings along with it, a conversation.

‘May I borrow the lighter please?’

‘Thank you. What part of the world do you hail from, Miss?’

‘The South-Central lands. And what about you?’

‘The North Country,’ he says.

The rest of the conversation is a breeze blowing over the deserted landscapes illuminated by the North Lights of the house of the Palace of the Tsar of the North Winds. Names exchanged. Awkward conversations. Laughs and smiles. But mostly silences understood perfectly well amidst the noise. As the cigarette burns deeply, his mind ploughs and returns back the memories. There is a sense of peace and simplicity in all of them. Even though they are worlds apart, there are bridges made by the skies, the North Lights and the fires made in windproof lighters.

As the snow begins to fall heavily, he walks back to the log cabin. He stops outside to write their names in the heavy snow blanket. He takes out another cigarette and repeats the ritualistic firing with the lighter, which is the sole witness to that conversation from a long time ago.

He smokes the cigarette slowly as the falling snow covers their names. Their secrets are safe. He smiles and walks inside. The lighter still being the sole witness of the secret.

Thank you for subscribing!

You will receive an email (at most once a week) with any new articles.

You can unsubscribe anytime with a link in the footer of the email.